WWII, Korea and the Cold War: The Valiant History of The USS Cassin Young

September 14, 2020
​1:15pm
Presented by Warren "Buzz" Smith
​The program is free and open to the public, but registration is required. Register here. 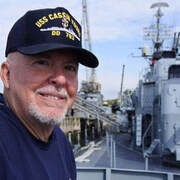 Captain Cassin Young was blown off his ship, the USS Vestral, during the Japanese attack on Pearl Harbor.  He reboarded, beached his ship to avoid blocking the narrow channel out to the Pacific, earned the Congressional Medal of Honor, and was killed in action off Guadalcanal.  The Fletcher Class destroyer that bears his name, built in San Pedro, CA in only nine months in 1943, brought honor to CAPT Young by continuing the naval tradition of honor in battle.

Warren “Buzz” Smith, retired USAF /USN reservist and active “hands on” volunteer for the USS Cassin Young, will tell the story of this decorated warship in the Pacific Theater.  He will also describe the life of a volunteer aboard the ship and “make a shameless plug for more volunteers and support of our organization.”

The USS Cassin Young began and ended her World War II combat at Saipan.  Her first action was providing gunfire support for the landing forces. She was then involved in every major naval campaign in the South Pacific, including the Marianas, Iwo Jima, the Philippines, and Okinawa.  She sustained two Kamikaze attacks near Okinawa, the first on April 12, 1945, resulting in one fatality and 60 wounded. The second and more severe attack occurred on July 30 with 20 dead, 40 injured and extensive damage to the ship.  She returned to Saipan for repairs as the war ended.

The USS Cassin Young returned to service during the Korean War and patrolled the Atlantic, tracking Russian vessels.  She was mothballed in 1960 and that looked to be the end of her.  She was rescued in the early 1970’s when the National Park Service brought her to the Boston Navy Yard as a museum ship.

Berthed on the same pier as the USS Constitution, the Cassin Young is open to the public for tours and information.  Guests are just as likely to be greeted by Buzz Smith or another fellow volunteer as a National Park Service Ranger. Buzz and his crew do whatever is needed to maintain the ship – repairs, maintenance, greeting visitors, answering questions, conducting tours.   Until COVID-19 closed the ship to visitors, Buzz estimates that 1000 tourists and schoolchildren would visit the ship on an average summer day. Note:  Cassin Young has just reopened to visitors on the main deck only with full precautions being taken.