​Serving Those Who Served

Attend in person or via Zoom.
​Coming on February 13, 2023:
​
​The World’s Deadliest Weapon – the Submarine
from “Pigboat” to “Planet Killer”

Join us for our next presentation ​live at Cary Library and via Zoom webinar! It's free and open to the public. If you are watching via Zoom, Register here to receive a Zoom link.
​

The submarine, first introduced as a naval weapons system in the early 1900s, has gone through remarkable developments over the past century. Once reviled and openly ridiculed by senior naval officers who favored gleaming surface ships carrying big guns over the small, slow, and smelly submersibles (mockingly called “pigboats”), the submarine has over the past decades vaulted to the forefront of naval combat firepower and lethality.

When submarines were initially developed in Europe and the US, leading naval theorists considered them the preferred weapon of “weaker powers”, a tool of countries whose battle fleets weren’t strong enough to fight for control of the seas in traditional surface combat.

As a result, subs were long disparaged as simple “Sea Denial” systems used primarily by second-rate navies. One Royal Navy admiral in the pre-World War I era, asked to comment on the role of the submarine to attack ships silently from beneath the waves, even deemed them “underhand, unfair, and damned un-English”.

However, in the course of two world wars in the 20th century, submarines matured rapidly and played a major role in determining the outcome of the fighting. In the postwar era since 1945, with the advent of nearly limitless nuclear power and long-range nuclear-tipped missiles, submarines became arguably the most powerful and survivable weapon system ever developed, capable of attacking enemy ships and targets ashore, and even devastating entire continents if needed. The commander of one ballistic missile submarine today has more annihilating explosive firepower at his fingertips than has been detonated by mankind in the entire history of time.

Max Mulholland will trace the history of the submarine from its early crude beginnings to its current state today, explaining the changes in submarine design and describing the submarine’s full spectrum of operational use, from the simple “sea denial” role to the ultimate “war termination” mission.

Max Mulholland, a graduate of the US Naval Academy, served 10 years as a Surface Warfare officer in the US Navy.  He taught naval tactics and strategy for three years at the German Naval College and published two papers on naval and diplomatic history.  After military service, he earned an MBA from Harvard Business School.  For the past 25 years, Max has worked in management, strategic planning, sales and marketing, business development and operations in industry and the public sector. 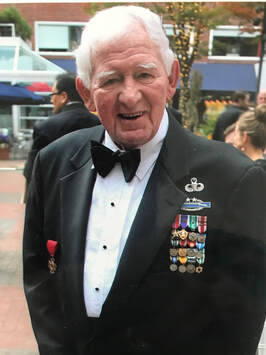 On Sunday, October 3, on the historic Lexington Green, an enthusiastic group of comrades, friends and well-wishers cheered the news of the creation of the Pat Flynn Youth Award to honor Winston “Pat” Flynn, war hero and outstanding Lexington citizen, who was remembered in a ceremony with full military honors.

Jim Ramsey, Executive Committee member of the sponsoring organization Lexington Veterans Association, announced that the Pat Flynn Youth Award Fund has been created, to be managed by the Town of Lexington.  Each year on Patriots’ Day, an outstanding student will receive a generous cash award from this fund.

The award will be a collaboration among the Lexington Veterans Association, Mrs. Edith Flynn, the Town of Lexington, and the Lexington Youth Commission. Doris Kraemer, friend and advisor to Edith Flynn, will head up the job of establishing the award criteria, publicizing the award, identifying candidates, and assembling the judges’ panel.

Donations to the fund are encouraged.  Make checks payable to Town of Lexington with the Pat Flynn Youth Award Fund on the memo line and mail to:

Want to find something quickly? Use this website search function.

To the following organizations and companies who have been invaluable supporters.
Please click on the logo to go to their homepage.​
​
Thanks to Dinesh Patel, MD, Sue Stering, and volunteers from the ​Lexington Town Celebrations Committee
​for the beautiful photographs included on our website.